It doesn’t take long for wedding pros to be in the business to know some couples really thrive on kitsch and irony. Such hipsters are not difficult to spot. The men in such couples will likely be sporting a handlebar mustache. The women will perhaps be wearing kitty-cat glasses. They both will be drinking PBR. 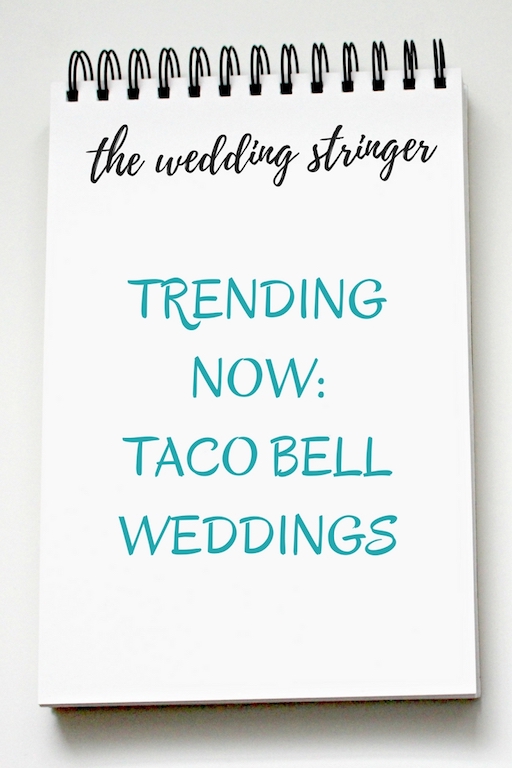 In Las Vegas, Taco Bell is gearing up, starting on August 7th, to give them what they want with Taco Bell-themed weddings available at their flagship store in Las Vegas.

Although making fun of hipsters is my favorite sport, I have to admit I would not be above this. Much to my blood pressure’s lament, I love Taco Bell. The idea of being married by a 17-year-old zitface saying, “By the p-power in…invested in me by the state of Nevada, I now pruh…pronounce you man and wife.” is absolutely hilarious (although I suppose I will have to make that happen other ways, as Taco Bell has said it won’t be employees officiating the weddings).

In order for lovebirds to make their Taco Bell dreams come true, they need $600 and an advance notice of four hours.  With that, they get:

The $600 price tag for what you’re getting seems kind of steep. I can see how having an on-call wedding officiant system could be somewhat expensive (but surely cheaper in Las Vegas than elsehwhere?), given they only need four hours notice.

But the rest of this, are you kiddin’ me? I doubt their reception room is used for anything else crucial. Champagne flutes are cheap and most of them don’t make you advertise something. The hot sauce bouquet is cute and maybe labor-intensive, but still.

The most egregious ripoff here though, is the food. Just ten tacos and a Cinnabon cake? That’s less than a taco per person if you manage to get 15 people! I remind you, this promotion is $600 and is being run by…a restaurant. A fast food restaurant. You know, where food is cheap and they can mass-produce it quickly and profitably.

If you’re a wedding professional, events like this give you two marketing opportunities. Firstly, people love funny pop culture miscellany like this, so to point at it in some way in your advertising gives you trendiness cache, especially if you can make a clever joke or two about it.

Now, can anyone tell me why I suddenly want a nacho cheese chalupa? I can’t think of anything that might’ve triggered such a craving.

Can you out class Taco Bell?