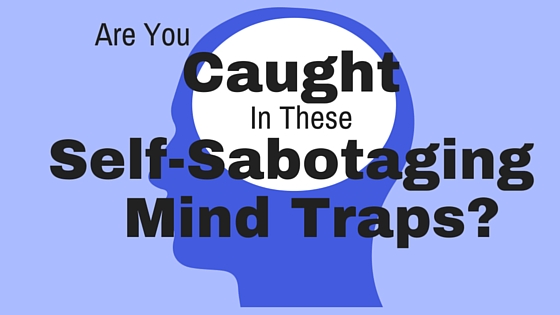 (Though this article’s geared to wedding photographers, the principles revealed here apply to us all. You’re a smart cookie, so you’ll see how it applies to what you do too.)

Not too long ago I published a manual detailing my wedding photography system for creating large after-wedding in-person sales using album pre-designs. As the manual circulated around more and more, I got feedback from many wedding professionals about what was stopping them – even scaring them – from reaching for, and achieving, higher sales and profits.

What was stopping them, was them, themselves.

Have you fallen into any of these 4 self-sabotaging mind traps?

“It’s just the way wedding couples are. And it will always be this way.”

You march out into the wedding world day after day, and again and again you’re bombarded with the same ol’ responses coming from all the couples. “No thanks,” “it’s too much” “we just bought a house,” “can’t afford more” and you think this is the way it is, and the way it shall always be forever and ever more.

Or so it seems.

You think that’s so, because that’s all you’re being exposed to. It’s what you’re seeing, feeling, hearing every day. it’s what you’re experiencing. So you’re thinking, “that’s what’s happening, so that’s reality.” But your mind is playing a little trick on you. You see, there’s all sorts of realities happening at the same time in the marketplace.

I don’t mean to sound new agey on you, getting all metaphysical (that’s not my nature), yet it’s that whatever you’re saying and doing is creating these results for you. But since you’re immersed in it and affected by it day in and day out, your mind says to you, “they don’t buy, they don’t spend, so this must be true of the marketplace” as surely as you’re convinced the world spins ‘round and gravity exists.

And as sure as the world continues to spin, you’re sure the circumstances you’re experiencing today will continue forever, never changing.

It’s a similar phenomena affecting police officers, for example. Their daily world has them dealing with criminals, bad people, violent situations. They see the worst things imaginable. And so to them the world is filled with horrors they’ve sworn to protect the rest of society from, and so, everyone’s actions is looked at questioningly, everyone’s a possible culprit, even when they’re not.

And because of that, you don’t dare offer more options, you present lower prices, you cut back and cut down. Just like you don’t dare to defy gravity.

And when they buy in at the lower prices, that becomes your positive reward for the action you took – and confirms things for you that yup indeed, it proves that’s the way it is.

They don’t have high-paying jobs. They’ve had some setbacks and money issues. They’ve told you their financial situation makes it impossible at this time to do more and they’re strapped.

But that’s a mistake too. You ever have it happen where people pleaded poverty, telling you their money woes, and you ended up slashing your prices or cutting a deal – or not selling anything at all… and then three weeks later you see them driving their new car on the way to the airport for their Bermuda vacation?

The simple truth is people somehow find the money to get the the things they really want. And one big way they find that money, is to not spend it on some other things they don’t want. Like your photos (or flowers or designs or music or…).

But it sure wasn’t because they couldn’t afford it.

What happened was you pre-judged their ability to pay. And again, because of that, you didn’t offer more options, you presented lower prices, you cut back and cut down.

And they bought in at the lower level and so you said to yourself, “See? I was right. They can’t afford more.”

You’re really being your own worst friend here.

The feelings and beliefs you personally have about money influence you. They limit you. You’re the one who thinks it’s too much money to spend on your stuff. You’re the one believing there’s more important things worth that money, that your stuff ain’t one of them, and if you were to get that amount of money for your stuff then correspondingly there’d be less money to go to the things which really matter and have more priority.

All that is you projecting your money beliefs on everyone else. None of the above is actually true. It’s only what you believe is true.

Besides which, it’s not for you to decide what’s appropriate for what someone else wishes to spend on anything.

But we’re raised from childhood with beliefs about money. We’re brought up hearing these beliefs and values being drummed into us, and so we’re trained to believe they’re true. For example, that wanting money is evil or that rich people are bad greedy people who screw others to accumulate wealth.

These are simply ways people put down – or excuse away – the reaching for wealth or to induce guilt about spending money.

I overheard a little kid recently, couldn’t have been more than ten years old, standing in front of Gucci’s NYC store window on Madison Avenue peering in, nose pressed against the window, looking at a bauble lit and shining in the spotlight, saying, “that’s too much to pay for that. It’s not worth that much” — and there weren’t even any prices listed!

Obviously he knew to perceive anything Gucci as “expensive” yet he had absolutely no idea what the price actually was or if the trinket gleaming in the display was worth it or not, or even at what price does something like that become “expensive” – he’s a little kid! But he’s already automatically programmed not to consider anything perceived as “expensive” as worth the money, and to summarily dismiss it.

Where do you think he got that attitude from? From his certification in gemology studies, his knowledge base of trigons, dodecahedral surfaces, octahedral crystal systems and his expertise in current market prices because of his extensive background giving jewelry appraisals? Was he born with an eerily accurate inborn sense of how much a ruby should sell for in New York City?

Of course not. He gets his money beliefs from the same place where we all get ours – from our upbringing with the beliefs and values instilled into us by our parents, peers, the media and authority figures. And they probably inherited it from the generations before them.

And all those voices inside your head are holding you back.

The cure? You have to get out of your own way.

Because again, as I teach in my manual, “if you don’t ask for it, you can never get it.” People aren’t going to volunteer to pay more than you ask.

If you’re old enough to remember Johnny Carson hosting the Tonight Show, you may recall that was his oft repeated response when a guest would tell him a little fact he wasn’t aware of.

The fact you may not be aware of is not knowing that making bigger sales, bigger profits from the same crowd you’re now dealing with is entirely possible, as impossible as it may seem to you right now.

Again I’m not trying to sound like some new age guru giving out some woowoo juice here, but think about this. Have you ever had a moment of enlightenment, an “aha!” moment as they call it, where you were given a bit of information or a new perspective on something and suddenly the lightbulb went on and you said, “ah! NOW I understand!” (or maybe you’re the quaint type and instead said, “Eureka!”).

And then you see the thing you didn’t know about the day before play out in front of you here and there wherever you go, whereas before you didn’t see it at all?

That’s because we have three basic levels of understanding. First there’s what you know. You already know what you know, so the next level is where you know there’s stuff you don’t know. And being aware of your lack of knowledge of that subject, maybe you’re thinking about learning that stuff so you know it.

Then all of a sudden what seemed impossible yesterday becomes your daily reality today. Because now you know about it, and you know what to do about it. I’ve witnessed futures and fortunes change because of that.

So seek out that knowledge. Because once someone opens up your eyes to it, it can be a life changer.

G.E. Masana is a photographer and author of several books. His latest, “Maximum PROFITS From Album Print Sales,” detailing his after-wedding sales system, can be obtained right now at http://boostweddingphotographysales.com/high-profit-wedding-album-designs