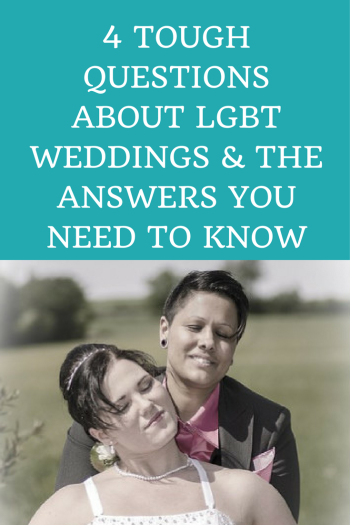 Whether you support marriage equality or not, it’s wise to learn about how the LGBT wedding market is having an impact on your business.

I interviewed Bernadette Smith of the Gay Wedding Institute to get a state of the union for today’s LGBT couples getting married. In case you haven’t met Bernadette, she started the very first business specializing in planning for legal same sex weddings (14 Stories) 13 years ago, and she’s been on the cutting edge of equality issues ever since.

Bernadette created the Gay Wedding Institute to have a global impact by training people in the wedding industry to be more sensitive. “It’s a win-win. Couples get supported and business picks up for the vendors.”

“Will Same-Sex Weddings grow your business?”

One of the motivations for wedding pros when it comes to marketing to the LGBT community is money. It’s a market with a lot of discretionary income that’s potentially underserved. I asked Bernadette about the impact for wedding businesses who serve this market.

“Is serving the LGBT wedding market going to make you rich? No way. But it will add one or two more weddings to your bottom line every year,” she says.

Heteronormative describes a worldview that assumes that straight is the normal or preferred sexual orientation.

The wedding industry has been particularly guilty of heteronormative behavior because it’s so bride focused. (Even the name of this website, Book More Brides, demonstrates this mistake!)

“The assumption to this day is that if a female is calling, she must be marrying a man. ‘And what’s the groom’s name?’ or ‘How did he propose?’” Bernadette explains.

One of the best things you can do for your business is to NOT engage in these heteronormative assumptions.

If you don’t learn to understand LGBT (lesbian, gay, bisexual and transgender) prospects, you’re going to make a critical mistake.

This isn’t just going to hurt you with LGBT couples, either.

70% of straight Millennials support marriage equality. Offend the LGBT community and it can offend your heterosexual clients, too.

“It’s not generally done to be offensive; it’s accidental,” Bernadette explains. “Most people 40 and over are forgiving. Younger couples are not because they expect you to know better.”

Many of today’s Millennial couples are inspired to buy from wedding pros who support the marriage equality rights of their gay loved ones.

“How can you market to same sex couples without turning off the straight ones?”

“Get rid of everything that’s bride-focused. Make it neutral, and include some ambiguous photos on your website (bride by herself, groom by himself, a picture of two bow ties) so that the interpretation can work for both gay and straight visitors.”

This is a more moderate approach that isn’t as effective in attracting the LGBT market as displaying a photo of a same-sex couple holding hands would be, for example, but it’s an easy place to start.

“How can you support today’s LGBT community?”

Members of the LGBT community are afraid of rejection to begin with. Since marriage equality rights have come into question after the recent Presidential inauguration, that’s only increased.

Reassure couples that you support marriage equality by:

If you wish to attract this audience, lend your support in big and small ways to let them know they aren’t alone.

“The #1 thing these couples are looking for is vendor who’s completely inclusive. It’s more important than price, customer service, or whether the date is open. They look for a message they are accepted before they pick up a phone to call or fill out a form. They’re stalking you, looking for images of couples like themselves represented in your marketing,” Bernadette says.

“What if you DON’T want to do same-sex weddings?”

DISCLAIMER: I fully support marriage equality as does Book More Brides. I am asking this question because I also support the educational needs of those in our community who may not share my personal views.

This is a question Bernadette doesn’t often get because she’s “preaching to the converted,” as she puts it.

If you find yourself in this camp:

#1 – Know the law where you live. In 21 states, it’s against the law for you to discriminate and you can be sued.

#2 – If your state does permit discrimination, craft a respectful response with a referral to someone who will take good care of the couple. Simply say you’re not available and leave it at that. Don’t give an explanation that will only cause offense.

#3 – Make your website as “straight” as possible. This will deter LGBT couples right away.

If you do get approached by a same-sex couple who simply isn’t a good match for your wedding business, you can respectfully decline to serve them for non-discriminatory reasons. As long as you have pro-equality statements or images on your website, it would be hard for them to make a case of discrimination against you.

This is just the tip of the iceberg when it comes to questions and answers around LGBT weddings.