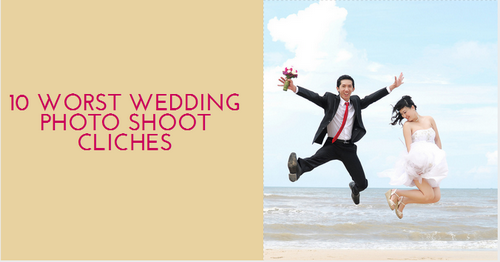 With the value that couples (your potential clients) attach to their precious wedding photos, it is easy to get carried away when it comes to copying every tried-and-tested pose out there that other wedding photographers tend to stick to.

But while it’s perfectly understandable to want to take the same token wedding shots every time to play it safe, there are certain ones that are so overused, so corny, and so totally cliché, people will end up cringing at the sight of them instead of applauding your incredibly flattering lighting setup or the crispness of your photos.

These days, most couples tend to shy away from the conventional and opt for more imaginative concepts for their own wedding shoots. Boring, overused wedding poses are not what they are looking for, and having those kinds of photos in your portfolio certainly won’t do you any favors or earn you more business.

Create a better portfolio and attract more clients by taking note of these wedding photo shoot clichés that you need to stay away from at all costs: 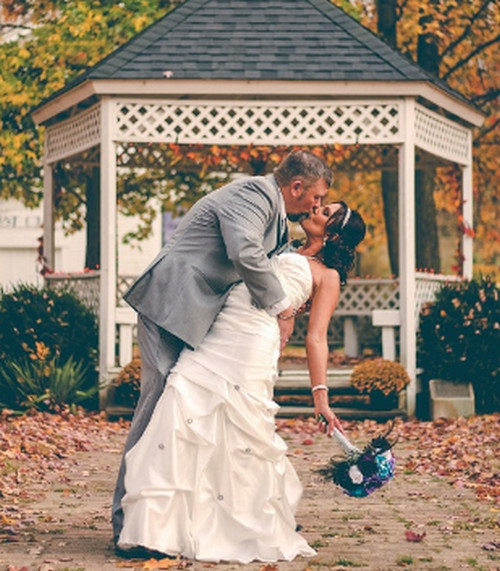 This is a type of shot that was once adorable, but now makes other people want to roll their eyes due to overuse.

It comes in slight variations, like the couple kissing with their hands clasped, the bride’s bouquet covering the couple’s faces, or perhaps an overly exaggerated pose where the bride’s foot is kicked out like a can-can dancer as she is being dipped for that romantic kiss.

2. Groomsmen Helping the Groom Put On His Wedding Attire 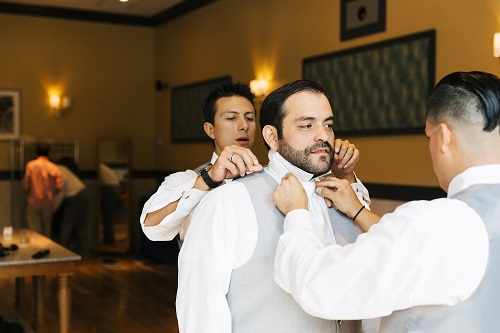 Come on, is this moment really worth shooting? What’s so special about the groom putting on his coat?

There are more creative ways to capture the unspeakable bond of brotherhood between the groom and his groomsmen other than this pose. It’s actually pretty weird too, because grown men don’t really help each other put on their clothes in real life, right?

The same goes for the bride—shots of the bridesmaids helping the bride put on her shoes or fix her veil is not the only way to convey sisterhood. Be more innovative.

3. Bride and Groom Holding Hands (and Staring Into Each Other’s Eyes) 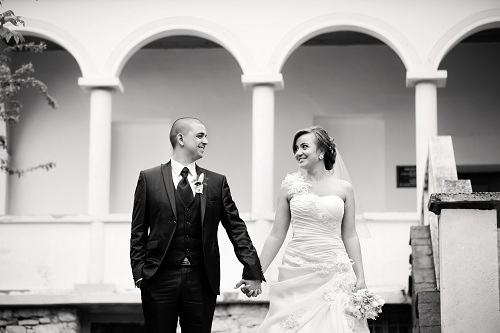 We’ve seen too much of this shot already, and if cutesy shots like this are not the couple’s thing, this pose can appear forced rather than sweet.

It’s hard enough to make couples who are not used to being professionally photographed feel comfortable with posing.

4. Couple Forming a Heart with Their Hands 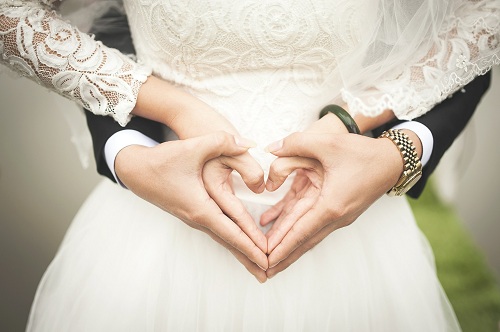 Can anything be cornier than this? They are getting married, aren’t they?

There’s no need to show that their hearts are now one through this pose.

5. Jumpshot of the Bride and Groom 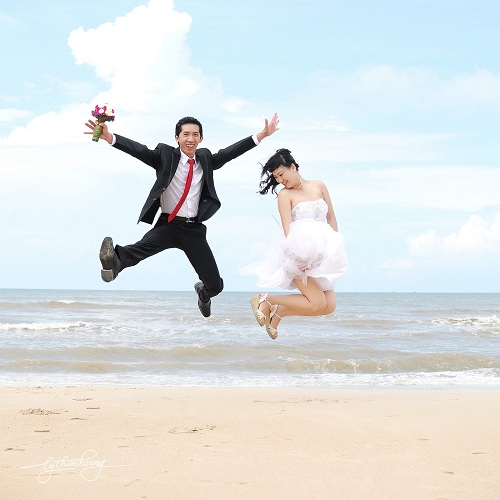 Probably the most overused pose out of everything in this list. It was great when it first came out, but it soon got tiresome to look at after it’s been used and abused in almost every setting.

Besides, think of how difficult it would be for the bride to jump in her dress. Unless trashing the bridal dress is what you really intend to do, the shoot might just end up in disaster.

6. Shot of the Bride’s Shoes 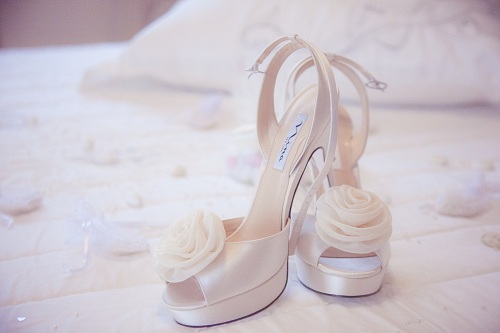 Unless these shoes are incredibly significant to the couple, there’s no point in giving them a special photo shoot all to themselves.

If the bride really wants to have her shoes in the photos, photograph them while she is already wearing them on her feet, and use creative poses to make the shots look more interesting (and not like she’s just trying to show off her shoes).

7. Couple Posing Behind an Empty Frame 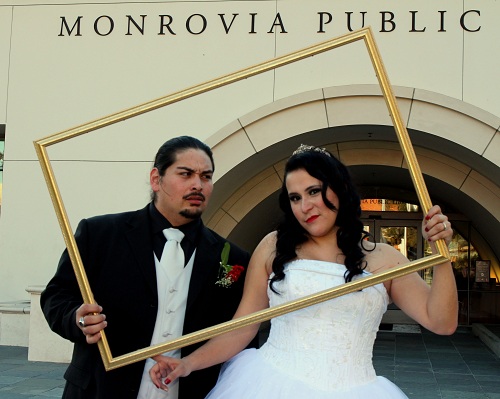 Again, there are many other fun and creative poses that won’t make people cringe upon seeing your photos. So just leave the empty gold frame at home when you set out for your next wedding shoot.

It’s okay to bring props, of course, but make sure to choose ones that actually make sense for the couple you are shooting.

This idea might have been fresh and innovative at one point, but now it’s just terribly cliché.

8. Black and White Photos with a Pop of Color 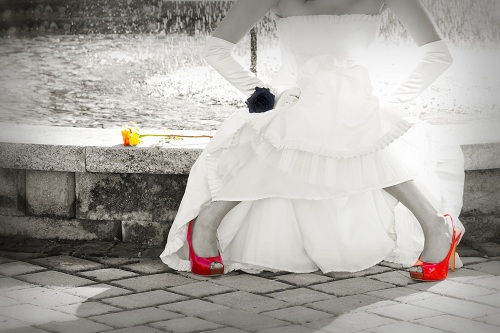 What’s worse than mindlessly editing photos into black and white? Adding a pop of color to random objects in the photo.

Not only is this technique overused, but it also makes the photos look incredibly tacky and makes you look like a complete Photoshop newbie.

9. Wedding Dress on a Hanger 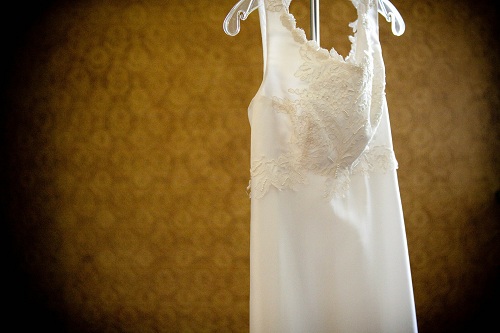 Sure, this is a classic shot, but have you ever noticed how unsightly the hanger of the dress looks in this shot? Better shoot it while the bride is wearing it instead.

Need some inspiration? Take a cue from the many wedding dress shoot ideas out there. Just please stay away from taking a photo of it on a hanger. 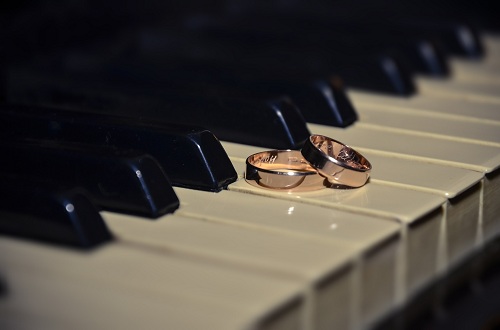 Sure, it’s important for the bride and groom to have a photo of their wedding rings—but let’s use some imagination here. It’s always the same shot: the rings stacked one on top of the other, carefully placed on some random object.

The most commonly used for this token wedding shot are wedding invitations, Bibles, or the bride’s bouquet. And unless your chosen object or background holds something really special for the couple, it’s probably better to just avoid it altogether.

As a wedding photographer, you are able to perceive things differently.

Use that skill to tap into your creative juices and come up with one-of-a-kind themes and concepts for all of your wedding photo shoots.

Ask the couple what they like and which places and objects are significant to them. From there, you can come up with shots that are uniquely their own without relying on cookie-cutter ones to carry you through. 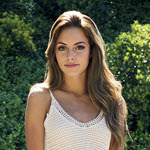 Lacey Hauptman is a freelance writer, graphic designer, and stay-at-home mom, as well as an animal lover, a frustrated fashionista, a hopeless romantic, and a Harry Potter nerd. When she’s not fulfilling her wife and mom duties, she enjoys reading YA fiction (which she’s probably too old for) or writing stories, poems, essays, and more.