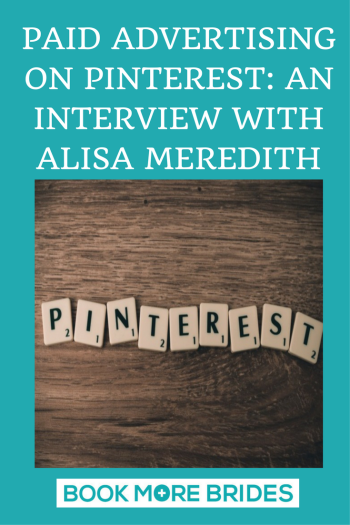 Her expertise was just oozing from her pores—she was on fire! So I had to pick her brain about Pinterest since it’s my fave social media site for wedding marketing.

But first let me give you the 411 on promoted pins.

First, the campaigns on Pinterest are very similar to Facebook Ads. (In other words $100 of advertising can last you a month if planned correctly.)

There are different types of Pinterest campaigns:
•    Awareness
•    Engagement
•    Traffic
•    One-tap pins (pins that go directly to your site when clicked, skipping a step)

Alisa strongly recommends only doing traffic campaigns where you pay for clicks only.

I asked Alisa, “For those who sell services (instead of products), what are some ideal ways to use promoted pins?”

She suggested using promoted pins to grow your email list.

She said, “Send people to a helpful blog post with an irresistible opt-in offer. Consider using popups to increase conversions. Don’t just put a CTA at the bottom of the post — visitors from Pinterest often don’t stick around as long as others, so while you don’t want to hit them with a request for an email address the instant they arrive, don’t wait too long!”

I asked Alisa to talk more about “search ads” which are coming soon. She said, “Brides start using Pinterest to plan their weddings early–sometimes before there is even a potential groom! The way the current campaigns work with keyword targeting means that you’re going to end up paying to have your pin seen by people who are not even close to being ready for your wedding product or service. The new search ads’ keyword campaigns will show your ad ONLY when someone searches.”

Get to those brides FIRST! I love it!

Alisa continued, “So, if someone searches ‘Wedding Planner San Diego,’ your promoted pin will show up right then and only then, not just randomly in the home feed of someone who might have saved a pin from or about a San Diego Wedding Planner because she thought it was pretty.”

Shopping campaigns are also coming to Pinterest and will be useful for those who have many items and constantly-changing inventory.

Alisa explained that shopping campaigns will automatically generate promoted pins based on your product feed, saving a ton of time! Very cool.

I had to ask, “If someone wanted to work with you to set up a promoted pins campaign, how does that work?”

Alisa said she starts by discussing people’s goals and budgets, looking through their existing web content, assessing their audience and sales funnel, and then she creates what she called a “high-value, lower-cost” targeted Pinterest campaign.

“I look at what they’re paying Facebook or AdWords for these clicks and aim to be lower if at all possible!” says Alisa.

Finally, I asked Alisa for her “elevator pitch.”

“I help businesses increase traffic and leads with blog posts, quality lead magnets, and social media, including underutilized visual platforms such as Pinterest!”

Are you interested in trying promoted pins? Have you already tried them? Let us know below.