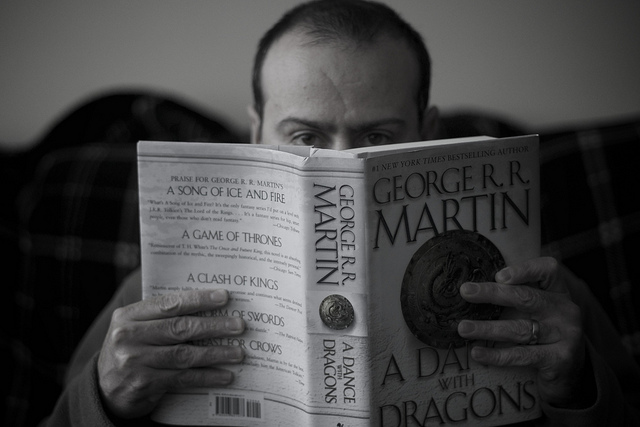 It’s Sunday night and I’m dancing around Jeff in a circle. Yes, I’m that excited.

In honor of this weekly obsession in the Padovani household, let’s explore what Game of Thrones can teach you about your wedding business.

1) Daenerys Targaryen: Stand out from the competition and inspire couples with a mission and brand.

The best way to stand out from the competition that nobody talks about is to express your true personality and passion with a cause that also inspires your ideal clients. Nobody gives a better example of this than Daenerys.

The exiled daughter of the former Mad King (really getting my Game of Thrones geek on now) proclaimed herself Queen by powerfully branding herself as the Mother of Dragons and Freer of Slaves.

When you’re passionate about a cause…whether it’s environmentally-friendly materials or punk music…and you allow your passion to infuse your business, you become irresistible to couples who will love working with you.

Of course, you’re going to alienate the sticks-in-the-mud who don’t “get” you, but that’s the point.

When your message is strong and recognizable, you instantly stand out and get noticed.

2) Ned Stark: Sometimes it’s okay to break your own rules.

Ned Stark prided himself on honor and honesty. When he discovered that the newly proclaimed King Joffrey had no right to the Iron Throne, he would not be silent, even though it meant death by decapitation.

If only Ned had kept his mouth shut, he’d still have his head.

In a similar way, you need to pick your battles in your wedding business. For example, when you show up to the wedding and discover that the venue has seated you in a separate room for dinner, it’s an outrage. Your contract clearly states that you must be served dinner in the same room as the guests!

It’s important to know when to compromise for the betterment of your business.

3) George RR Martin: You can’t always judge a book, or a bride, by its cover.

The author of the Game of Thrones series is famous for taking a hated character and somehow making him likeable, even the worst villains who commit most heinous crimes. Appearances can be deceiving; the “good guys” aren’t always good and the “bad guys” aren’t always so bad.

Remember this when you get those dreaded emails (“How much for your price and packages?”) Before you freak out about price shoppers and tire kickers, remember that just because they’re asking about price, that doesn’t make them a budget shopper.

If you assume that every bride or groom behind every price inquiry “only cares about price,” you are losing money.

Assumptions limit your profits when they cause you to respond defensively or half-heartedly.

4) Stannis Baratheon: Whining about what you deserve doesn’t make it any more likely to happen.

Stannis takes grim, stony whininess to a whole new level. “I’m the rightful King! It’s not fair!” He throws a tantrum in every scene, but none of it brings him any closer to taking the throne. In fact, it alienates his followers and reduces his chances of taking control.

It’s one thing to take a moment to grumble about the low-priced competition or the fact that those bridal leads never respond to your emails. Go ahead and vent. For a minute.

But whining and complaining publicly about the sad state of the wedding industry and the unfairness of the amateur competition isn’t going to solve your problems. It just makes you look like a loser.

5) Margaery Tyrell & Joffrey Baratheon: There’s more than one way to get what you want, and it’s better (and safer) to do it by winning people’s affection rather than using fear and intimidation.

“Everyone is mine to torment! You’d do well to remember that…” King Joffrey Baratheon

King Joffrey, the teenager known for cruelly killing animals and women at whim, rules by fear. Marjorie, his new Queen, wins the hearts and minds of the public by generously donating to charity and throwing festivals to entertain the populace.

Ruling by fear or ruling by love. Who wins? Well, not to spoil the series for you, but let’s just say Joffrey gets what’s coming to him.

You can play the game of business as a ruthless competitor who grasps every penny of profit by whatever means necessary, or you can make friendly alliances with your competition, dedicate yourself to being the best in your market, and dominate that way.

Both methods can be effective, but if you want a long and happy business life, it pays to make friends and influence people along the way.

Thus concludes the application of Game of Thrones to your wedding business. Now the next time I’m watching the show, it counts as business education time.

What business lessons have you learned from TV and movies?