Same sex marriage in the United States is officially legal in all 50 states.  Whether you know it or not, it’s impacting your wedding business. 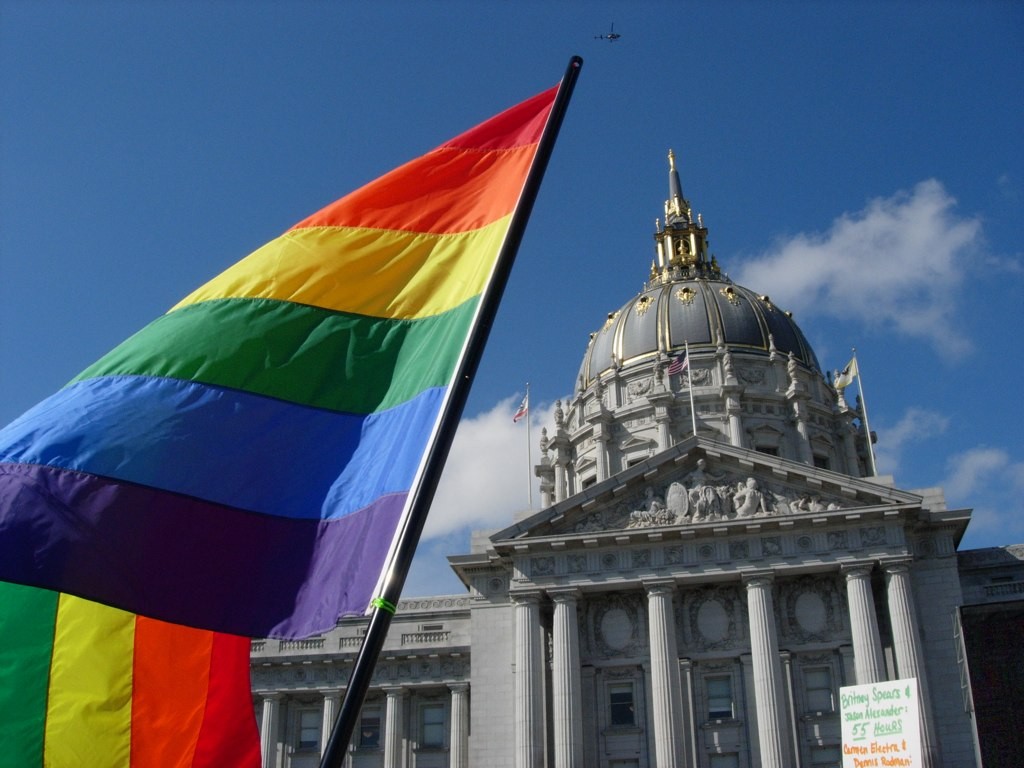 A Brief History of Marriage Equality

The 1970’s – The movement to grant civil marriage rights and same sex marriage begins.  In 1971, the Minnesota Supreme Court rules that same gay marriage bans do not violate the federal constitution.

1996 – The Defense of Marriage Act (DOMA) is enacted.  It holds that no state is required recognize the legal validity of a same-sex relationship even if it’s recognized by another state and gives the federal definition of marriage as “a union of one man and one woman.”

2004 – Massachusetts is the first state to legalize same sex marriage.

June, 26th 2015 – The U.S. Supreme Court rules that the Constitution’s guarantee of equal protection under the law gives same sex Americans the right to marry, expanding same sex marriage rights to all 50 states.  Go here for updates on marriage equality by state. 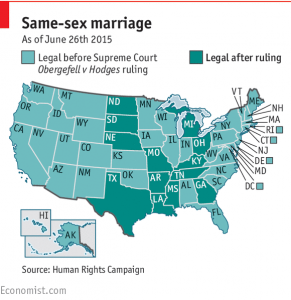 What Every Wedding Pro Needs To Know

Whether you support marriage equality or not, it’s coming to the US in full force.  Here’s what you need to know to make sure your wedding business thrives with this new market.

#1 – If you decline service to same sex wedding couples, you may be fined for discrimination.

This is a tricky one to navigate, especially since I’m a huge proponent of individual liberties.

On the one hand, a wedding professional should have the right to refuse a client who is belligerent, difficult or just not the right match.  (In fact, I’ve written about how to fire a client gracefully.)  On the other hand, it’s not fair to discriminate against a client due to race, religion or sexual orientation.

Should you be allowed to refuse a client?

If you own a public business, you may be sued for refusing to serve same sex couples, even if you claim religious reasons.

Religious rights advocates claim that the Constitution allows people to abstain from a ceremony if it contradicts their religious beliefs, and that preventing this violates their freedom of speech.

Supporters of marriage equality point out that this is a civil rights issue.  Same sex couples deserve equal treatment under the law, just like minorities and women who are protected by anti-discrimination laws.

Even though the US was founded on the notion of individual freedom and equality, we need these anti-discrimination laws to protect the rights of all our citizens.

Here’s the ugly truth about allowing businesses to abstain from serving individuals based on a “religious belief”: some religions allow or even encourage slavery and racial discrimination.  Even the Bible can be interpreted in this way.

If we hadn’t passed legislation prohibiting these discriminatory practices, these conditions would run rampant in the United States today.

“Not long ago, business owners believed they should have the right to deny people services on the basis of the color of their skin. This is really no different…any professional who runs a business in the public sector must follow the corresponding laws within its jurisdiction. To do otherwise is discriminatory.” – Kathryn Hamm, President of GayWeddings.com and co-author of, The New Art of Capturing Love: The Essential Guide to Lesbian & Gay Wedding Photography

“…there is an important difference between requiring restaurants or retail stores to serve everyone, and what we are seeing now with individuals and small business owners being forced to actively participate in highly controversial same-sex ceremonies...The notion that the government could compel anyone to be involved in a religious ceremony, for any reason, is antithetical to the First Amendment…

if a church wanted to hire a videographer to film one of its services, would we force an atheist to accept the job and be part of the service against his will?  I sure hope not. So why are we forcing people to be part of ceremonies in churches and other venues that violate their conscience?  We absolutely have to respect each other enough to allow people—including professionals and small business owners—not to be involved in our special events if it clashes with their beliefs and convictions.” – Staff Attorney, Matthew McReynolds with the Pacific Justice Institute

“As a gay man, I would NOT WANT to be doing business with a business that does not want to enthusiastically serve me. I think the only type of organization which should be forced to serve gay couples are the governmental entities like magistrates that process marriage licenses and do the legal ceremony, and companies that have monopolies (like gas and water companies) serving an area.” – Stan C. Kimer, President of Total Engagement Consulting by Kimer

Anti-discrimination laws may limit your religious or civil liberty in service to the greater good of guaranteeing civil rights and equal treatment for everyone.

When the state government passes a law requiring us to wear our seat belt, that’s a limitation of our civil liberty.  In a state of pure liberty, we would be permitted to choose what we wear, whether it’s a seat belt or a fedora.

It’s commonly understood that limiting our civil liberty in this case is acceptable because it keeps us safe and reduces the burden of medical expenses on society.  Anti-discrimination laws are passed for the greater good as well.

Here are just a few businesses impacted by these laws:

Laws vary based on the state you’re in, so investigate your governing antidiscrimination laws so you don’t violate them by accident.

#2 – You’re missing your share of $2.5 Billion by not serving same sex couples.

The United States wedding industry generates $51 billion annually and employs an estimated 800,000 wedding professionals, according to market research by IBISWorld.  Legalizing same sex marriage is predicted to add $2.5 billion to the economy.

Nerd Wallet’s analysis on the economic impact of gay marriage shows an increase in the economy for every state in the form of millions of dollars.

Same sex marriage is good for the economy of the nation, of the states and individual businesses.

“Should wedding businesses be forced to serve interracial couples? Of course they should…Because turning them away shows them that they aren’t seen as equal or valid in comparison to mixed sex couples. Wedding businesses should not be turning away potential customers; that wouldn’t be a smart business decision, now would it? This isn’t an issue of religious freedom; it’s an issue of discrimination.” – Kristen Martinez, M.Ed., Ed.S., LMHCA, NCC, Pacific NorthWell

#3 – Refusing to serve the same sex wedding market can hurt your bookings with the traditional bride/groom market.

According to the Pew Research Center, 55% of all Americans support same sex marriage.  When it comes to Millennials (those born after 1981) who make up the primary marrying demographic, the report shows 71% in support of same sex marriage.

Even if you choose not to work with couples who are planning a gay wedding, it’s very likely that your target market is a supporter of marriage equality.  These Millennial couples often prefer to hire wedding professionals who share their beliefs and interests, so not serving the same sex wedding market works against you.

Same sex marriage is a “deal breaker” for Millennials when it comes to politics; the same may apply to their choice of hiring wedding professionals.

“A strong majority of straight millennials (77%), as well as wedding professionals (based on a study we did with WeddingWire where 82% said they planned to serve same-sex couples in 2014), support marriage equality so, to be competitive, professionals need to educate themselves and think about being inclusive in how they frame and present their services.” – Kathryn Hamm, President of GayWeddings.com and co-author of The New Art of Capturing Love: The Essential Guide to Lesbian & Gay Wedding Photography

4. If you refuse to serve same sex couples, other wedding pros may stop referring you.

While this may seem unlikely if you have close connections in the wedding industry who trust you with their referrals, it’s happening to some US wedding business who’ve declined the same sex wedding market.

The owners of Sweet Cakes by Melissa of Oregon refused to bake a cake for lesbian brides-to-be and were fined $135,000 for violating antidiscrimination laws, as a result. In addition to the hefty fine, they closed their business due to the fallout.

But it wasn’t just the fine that hurt them financially.  “I mean quite frankly, they [the couple] didn’t just harass us, they harassed the other wedding vendors that we did business with. It cut off our referral system,” said Aaron Klein, Melissa’s husband.

Another wedding planner in Florida who declined to work with a same sex couple has been overwhelmed with negative comments and reviews.

Freedom of speech does not equal freedom from the consequences.

“When I first came out in support of marriage equality years ago I was discriminated against. Some bigoted wedding planners vowed not to do business with me...I stuck to my guns and belief of equality. And it has paid me back tenfold. Thanks to the local wedding associations they allowed me to help train and advise other vendors on how to successfully work with same-sex couples. I am now the go to guy for same-sex couples to be married by.” – Alan Katz, President of Great Officiants

#5 – The same sex wedding market isn’t large enough to be a profitable specialty for most wedding businesses.

While no one fighting for marriage equality wants this issue reduced to dollars and cents, the economic benefit alone may be enough to convince wedding businesses to court the same sex marriage market.

However, it’s important to note that the number of same sex weddings is still a comparatively small portion of the market.  A wedding business that intends to specialize in gay weddings may find the market isn’t large enough to support their income goals.  The exception would be for businesses in metropolitan areas with a large gay population or those who are willing to travel.

Most wedding businesses do best to extend their current services to same sex couples, rather than serving them exclusively.

Check the size of the gay population and the predicted number of same sex weddings in your market before deciding to specialize solely in serving this population.

Read more about the issues to consider before entering the same sex wedding market.

The Future of Same Sex Marriage

Although same sex marriage is legalized in all 50 states, there is still a battle to fight. As President Trump settles into his four year presidency many worry about the future for the LGBT community. However, in a recent poll, support for gay marriage in the United States has hit a record high. .

Some wedding professionals who believe their religious freedom is violated by being forced to serve same sex couples are fighting back.  The Hitching Post chapel in Idaho is counter-suing and redefining their business in more religious terms to avoid complying with anti-discrimination laws. Another option for these businesses is to attain not-for-profit status.

Meanwhile, wedding professionals are aligning with same sex wedding advocates in organizations like Wed We Can.  These professionals are creating a progressive, inclusive brand identity that is attractive to many young couples.

It’s time wake up and start practicing the values of equality this country was formed upon in our own wedding industry.