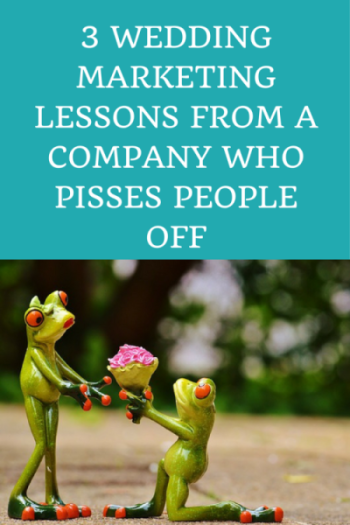 Have you ever played the game, Cards Against Humanity?

My step-sons introduced it to us, and it is by far the most irreverent, disgusting and politically incorrect game that’s ever existed.

We played it at Thanksgiving a few years ago and I laughed until my sides hurt.

It is, without a doubt, a thoroughly offensive game created by people who get off on pissing people off.

Watch more to learn how to make money from nothing (literally):

You might not think Cards Against Humanity is the bee’s knees. In fact, you might absolutely loathe it.

But they’re laughing all the way to the bank.

Here’s what you can learn from them about how to market your wedding business:

Cards Against Humanity is for people who are sick and tired of being politically correct. It gives voice to the absurdity of life and how darn uptight people can be.

It holds great appeal for people who are somewhat cynical, find humor in the irreverent and enjoy being in on the joke while those easily offended run around in horror.

The company knows it offends people, and it doesn’t care. In fact, it sets out to do just that.

In a country that’s been white washed by political correctness, the contrast is almost refreshing.

Let brides and groom know what you REALLY believe. Share what you love and what pisses you off. Yes, you’ll drive away people who disagree…but you’ll draw those who agree with your views like a magnet.

#2 – Be outrageous to stand out from the crowd.

The Cards Against Humanity Black Friday promotions provide an endless delight for people with a perverse sense of humor (like me.)

Say what you like about the game, these guys are not boring.

Quit playing it safe with homogenized, vanilla marketing campaigns. Be bold and different. Get noticed.

#3 – Sell an experience, not features.

The people who participate in these outrageous Black Friday Sales must be out of their minds, right?

They give Cards Against Humanity money without receiving anything of value in return.

For those who participate in the Black Friday stunts, it’s 100% about the experience. They aren’t buying anything tangible.

They’re buying the way it makes them feel: smart, cynical, in on the joke.

Let’s be real: there is no reason why couples need to spend $30,000 to get married. There’s absolutely nothing practical about it.

They’re chasing an experience, a feeling, a way they want to see themselves and be seen on their wedding day.

Sell THAT and you’ll never have to compete on price.

You can literally get people to pay you money for nothing — and then watch them brag about it.

A Model For Modern Wedding Marketing

Want to get noticed? Get up on your soapbox and share your most passionate beliefs. Get fired up. Piss some people off.

Cards Against Humanity is a role model. (Scary thought, that.)

If you’re not sure what your passionate beliefs might be, all you have to do is watch yourself. What really pisses you off? What gets under your skin? WHY?

Exploring this is one of my favorite ways to empower entrepreneurs in their businesses.

Get up on that soapbox, my friend, and YAWP.